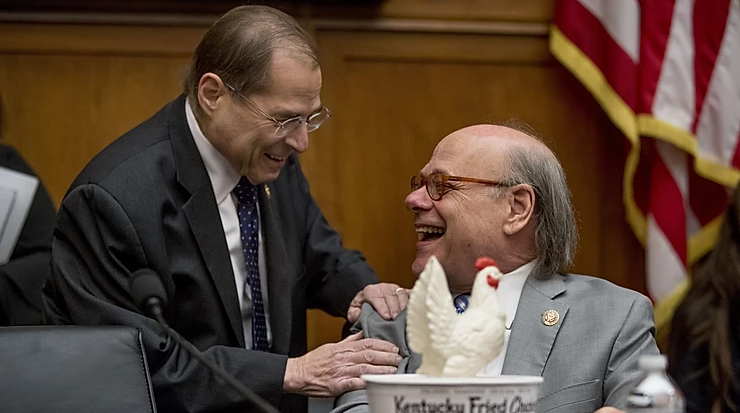 WASHINGTON (AP) — Attorney General William Barr skipped a House hearing Thursday on special counsel Robert Mueller’s Trump-Russia report, escalating an already acrimonious battle between Democrats and President Donald Trump’s Justice Department. House Speaker Nancy Pelosi said Barr had already lied to Congress in other testimony and called that a “crime.”
Democrats raised the prospect of holding Barr in contempt after the department also missed the House Judiciary Committee deadline to provide it with a full, unredacted version of Mueller’s report and its underlying evidence. Committee Chairman Jerrold Nadler of New York said that if the attorney general doesn’t provide the committee “with the information it demands and the respect that it deserves, Mr. Barr’s moment of accountability will come soon enough.”
Barr’s decision to avoid the hearing, made after a disagreement with the committee over questioning, and the Democratic pushback brought both sides closer to a court battle — one that could pit Trump against House Democrats well into the 2020 campaign season. The standoff further heightened tensions sparked by Trump’s refusal to comply with House investigations, with some senior Democrats hinting that a continued blockade could nudge them closer to impeachment. Nadler said he wouldn’t immediately issue a subpoena for Barr’s testimony but would first focus on getting the full Mueller report, likely including a vote holding Barr in contempt of Congress.
With Barr absent, Democrats convened a short hearing that included an empty chair with a place card set for Barr. Shortly afterward, Pelosi increased the tensions further. In a reference to the attorney general’s testimony last month, Pelosi said Barr “was not telling the truth to the Congress of the United States — that’s a crime.”
To continue reading click here.