Cannes 2019: jury speaks out against ‘rage and anger’ of populist politicians 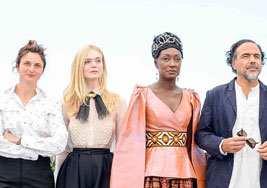 A familiar trio of topics – Netflix, gender disparity and Donald Trump – were on the agenda as the this year’s Cannes film festival got under way.
At the press conference introducing this year’s festival jury, its president, Birdman and The Revenant director Alejandro González Iñárritu, took aim at Trump and offered support to theatre chains battling the dominance of the streaming service. Another jury member, Happy as Lazzaro director Alice Rohrwacher, criticised the film industry for failing to promote female film-makers.
Iñárritu, the first Mexican-born president of the Cannes jury, expressed concern at the rise of populist politicians including Trump and said that his presence at the festival served as a repudiation for the US president’s anti-immigrant policies. “These guys are ruling with rage and anger,” Iñárritu said. “They are writing fiction and making people believe those things are real. The fact that we are here is a statement in itself.
“We know how this story ends if we keep with this rhetoric,” he added, alluding to the outbreak of the second world war.
To continue reading click here.