Job market bounces back in March with 196,000 gain in payrolls 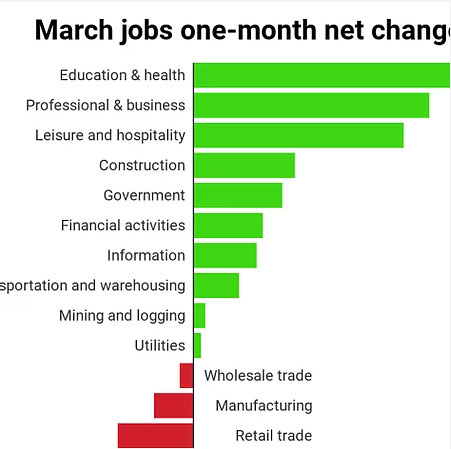 Job creation posted a solid rebound in March, with nonfarm payrolls expanding by 196,000 and the unemployment rate holding steady at 3.8%, the Bureau of Labor Statistics reported Friday.

That was better than the 175,000 Dow Jones estimate and comes after a dismal February that had economists wondering whether the decade-old economic expansion was nearing an end. The unemployment rate met expectations.

“With a strong March employment report now in the books, we’ve gotten some reassurance that the labor market is still strong,” said Steve Rick, chief economist at CUNA Mutual Group. “Of course, last month’s nosedive was disappointing, especially after December and January had such impressive numbers despite some sizable headwinds. But a good March report shows that February was more of an outlier than a canary in the coal mine.”

Wage gains fell off the recent strong pace, increasing just 0.14% for the month and 3.2% year over year, below expectations of the 3.4% pace from last month. The average work week increased by 0.1 hour to 34.5 hours.

A broader gauge of unemployment that also counts discouraged workers and those holding part-time jobs for economic reasons also was unchanged at 7.3%. The measure, known as the “real unemployment rate” is down from 7.9% a year ago.