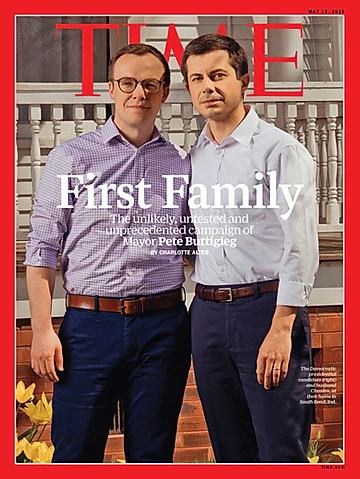 As Pete Buttigieg addressed supporters off a back porch in Marshalltown, Iowa, the Devil was whispering his name. “Pete,” the Devil hissed into a microphone. “You’re sooo smart, Pete.”
Buttigieg ignored the heckler, plowing forward with his stump speech about American decency as his husband ­Chasten looked on. “Pete,” the Devil whispered. “I want the heartland, Pete.”
The man in the devil costume was Randall Terry, an antiabortion activist. He had traveled to Iowa to torment the 37-year-old mayor of South Bend, Ind., the early breakout star of the 2020 Democratic presidential primary. “There’s never been a poster boy for homo­sexuals” before, Terry says. “There’s never been a homosexual that you’d go, ‘Wow, I’d be proud of him.’ He’s the guy. That’s why he’s such a threat.”
Four years after the U.S. Supreme Court affirmed his right to marry, Buttigieg has become the first openly gay person to make a serious bid for the presidency. And Terry is hardly the only right-winger worried about the rise of “Mayor Pete.” Buttigieg’s saying that “God doesn’t have a political party” prompted evangelical leader Franklin Graham to tweet that being gay is “something to be repentant of, not something to be flaunted, praised or politicized.” Concerned by the campaign’s rise, right-wing provocateur Jacob Wohl was recently caught trying to fabricate sexual-­assault allegations against Buttigieg to slow him down.
To continue reading click here.