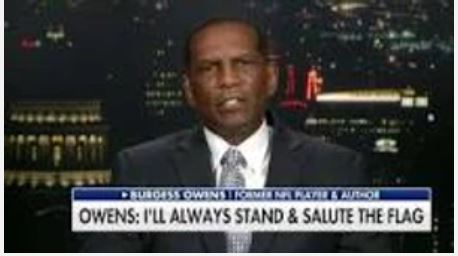 Retired football player Burgess Owens told Newsmax TV the NFL’s new policy that requires players to stand during the national anthem has an unfortunate flaw.
Owens told Wednesday night’s “The Joe Walsh Show” the league is off the mark by allowing players to stay in the locker room during the anthem and not be penalized — or take a knee on the sideline and cause their team to be fined. “This is a compromise,” Owens said. “They’re still keeping the same issues on the page in front of us.
“The fact that these young men can stay in the locker room and demonstrate, or they can stay on the sideline and demonstrate and not get fined, the team will get fined, says they really have not addressed this.”
NFL owners approved the new policy in a Wednesday vote in response to the national anthem protests that have impacted the league the last two seasons. They began during the 2016 season over perceived injustices of African-Americans.
To continue reading please click here.