Seven Ugly Lessons About the Media From Jussie Smollett’s Debacle 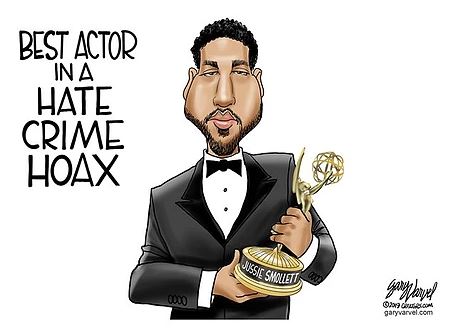 It’s all but official. Empire co-star Jussie Smollett lied about getting attacked by two Trump supporters on a sub-zero Chicago street.
Smollett says two men attacked him, doused him with bleach, threw a noose-like rope around his neck and yelled racial and homophobic slurs at him. Oh, and one cried something about being in “MAGA country,” meaning President Donald Trump’s supporters were to blame.
Smollett’s story had gaping holes in it from Day One.
Why couldn’t the cops recover any video footage of the attack despite a plethora of cameras working around the scene of the “crime?” Who plans to mug someone in sub-sub zero temperature at 2 a.m.? Why did Smollett ask the police to turn off their body cameras during the initial interrogation? Just how many loud and proud MAGA-wearing souls live in hard-left Chicago? Bleach freezes around 19 degrees Fahrenheit. How could it be liquid during the attack? To continue reading click here.