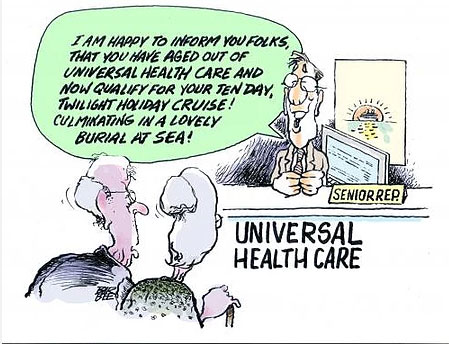 If you’re wondering what Democrats have in mind when they tout “Medicare For All,” look no further than England. There are more reports of the U.K.’s National Health System’s collapse, this time featuring horror stories of rationing care for the elderly. Doctors are now sounding alarms bells that seniors with cataracts are going blind as they wait for surgical approval.

The Guardian reported, “Patients who are losing their sight are being forced to wait for months before having eye cataracts removed because of NHS cost-cutting. … The NHS has imposed restrictions on patients’ access to cataract surgery in more than half of England. … The Royal National Institute of Blind People (RNIB) condemned the rationing as shocking. It warned that not treating people with cloudy vision risks them falling and breaking bones, thus costing the NHS more.”

Last year, The New York Times reported some people in England were waiting for 12 hours to be seen in emergency rooms.

“Some doctors took to Twitter to vent their frustrations publicly. One complained of having to practice ‘battlefield medicine,’ while another apologized for the ‘3rd world conditions’ caused by overcrowding,” the newspaper reported.

This is what happens when “the government” is paying for health care — people become the budget. Inevitably, the individual becomes nothing more than a budget item to be deemed worthy … or not.