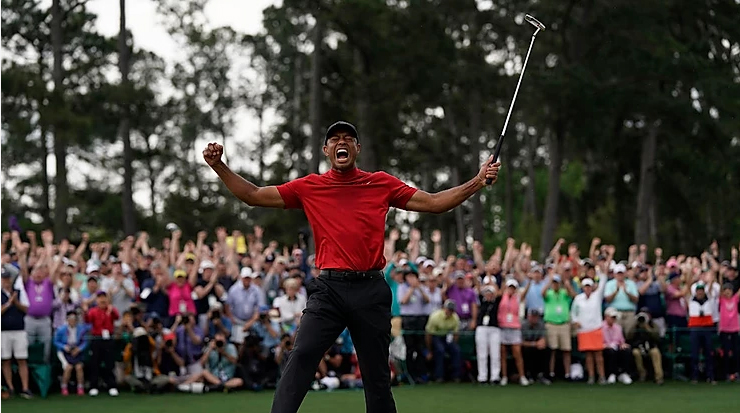 Tiger Woods won the Masters at a rainy Augusta National on Sunday, completing what was arguably the greatest career comeback in the history of golf nearly 10 years after injuries and scandal derailed his game.  The golf legend walked up the 18th hole to the sound of roaring cheers to capture victory, a throwback to earlier years when he consistently dominated the most prestigious tournament in the sport. Woods shot a final round score of 70 to finish 13-under par. Sunday’s victory was his fifth green jacket since 1997 and his first since 2005.
“When I tapped the [final] putt in, I don’t know what I did, but I know I screamed,” Woods, 43, said in Butler Cabin after the round. “To have my kids there, it’s come full circle. My dad was here in ’97, and now I’m the dad with two kids there.”
Woods made history 22 years ago when he won his first Masters at age 21, the youngest champion ever. But until Sunday, he hadn’t won a major in more than 10 years, having last captured the U.S. Open in 2008. Woods’ 11-year drought between majors was tied for the longest drought ever.
To continue reading click here.